Steve Martin: The Renaissance Man Still Wild and Crazy at 75

For over 50 years Steve Martin, the Texan born, California raised, comedian, actor, musician, writer, filmmaker, has been making us laugh, cry, think, read, and yes, swoon. Asking someone to list their favorite Steve Martin "moment" is a bit like asking, "Who's your Bond?" His career literally has something for every generation.

So who's your Steve Martin? Ask me (I'm a GenXer) and I would say, "Those aren't pillows!" ask my older brother he would say, "King Tut", ask my colleagues they'd enthusiasticly say, "Clouseau!" Sorry millennials Peter Sellers is Clouseau. You could ask my baby boomer cousins and they'd gush about the crush they had on Steve Martin as Meryl Streep's love interest in IT'S COMPLICATED, and my GenZ nieces would ask, "You mean that old guy in BILLY LYNN'S LONG HALFTIME WALK?" Yup that guy. And my mother, a member of the Greatest Generation, would no doubt recall her love for Steve Martin's hilarious physical comedy in so many movies.

Martin has been decorated with every imaginable entertainment award including, The Mark Twain Prize for American Humor, The AFI Life Achievement Award, the American Comedy Award's Lifetime Achievement, the 30th Kennedy Center Honors, the International Bluegrass Music Association's Entertainer of the Year, an Emmy, five Grammy Awards, an Honorary Oscar, and countless others including a Tony nomination (watch out EGOTS he's comin for y'all). Now 75, the comic, writer, movie star, novelist, children's book writer, playwright, pianist and banjo player, seems determined to write himself into the history books as the ultimate Renaissance Man of the 20th and 21st centuries. And he's also good at Twitter.

Martin began his show business career working at the Magic Shop at Disney's Fantasyland, honing his skills as a magician, juggler, and balloon animal artist. He enrolled at Long Beach State College to study philosophy, but soon transferred to the theater program at UCLA. Martin began working in television in 1967 writing for the Smothers Brother's Comedy Hour, for which he won an Emmy. After establishing himself as one of the most sought after comedy writers in television, Martin hit the road as a stand-up comedian which is where fame found him.

“With me, I would deny the punchline, and just keep going, so that the tension would just build and build so much that they would have to start laughing. They would find their own place to laugh, rather than laughing at the place where you told them to laugh.”

Being able to find ones own place to laugh sparked the collective nerve of post-Vietnam, post-Nixon era America. Steve Martin's innovative approach to stand-up: Slapstick blended with physical comedy, music and his unique let them find the punchline approach was the validation American audiences needed to laugh again.

Martin built a loyal, enthusiastic following across America performing stand-up in small clubs and venues. Spotlight-stealing appearances on the Tonight Show Starring Johnny Carson helped grow his audience from 300 to 40,000 as he became one of the first comics to sell out stadiums. Discovering that large arenas obstructed most audience members from seeing him on stage, Martin started wearing a white suit so everyone could see him. The white suit shined like a beacon and a signature fashion statement was born.

In 1977 Martin released his first comedy album, Let's Get Small. The album went Platinum (1m copies sold) and earned him the first of his five Grammy Awards. Let's Get Small contained the comedy bit, "Excuse Me", which became a national catchphrase, Martin's comedy was now part of the lexicon of American pop-culture. His follow up album was titled, "A Wild and Crazy Guy", named for his character Georg, one of the Czech Festrunk Brothers that he and Dan Aykroyd made famous on SNL. The album won a Grammy for Best Comedy Album, reached number two on Billboard's Pop Album Chart and was certified Double Platinum (2m+ copies sold) thanks to his now iconic SNL performance of the album's track, "King Tut".

In 1981 after one of the most storied careers in stand-up comedy history, Steve Martin quit the medium forever. His autobiography Born Standing Up, (which I highly encourage everyone to read), explains, as he states, "why I did stand-up and why I walked away".

In 1979 Steve Martin asked beloved comedian/writer/director Carl Reiner to direct his first feature film, THE JERK. Martin credits Reiner with teaching him how to make movies. Martin paid tribute to his friend and mentor in a recent New York Times article:

"I was a novice film actor-writer wannabe, and I got lessons right away," wrote Martin. "My goal as a co-writer of the script was a joke on every page; Carl’s was too, but all through the process he stressed and bolstered the tangential romance that was in the early drafts until it was in the forefront. Carl’s most valuable contribution to the movie was its emotional center, and I suspect it was those heart tugs that made the film a success.

After production ended on THE JERK, Martin and Reiner spent the next five or six years having lunch together every single day. They remained extremely close until Reiner's death June 29, 2020.

Steve Martin and Carl Reiner on the set of THE JERK 1979. Photo by Ronald Grant.

THE JERK made Steve Martin crazy famous and proved him to be a great investment for Hollywood--the film earned $100m at the box office on a $4m budget. Though rooted in comedy, Martin's film career has been as free-flowing as his stand-up. He has infused his deliciously madcap physicality into romantic comedies like ALL OF ME co-starring Lily Tomlin, ROXANNE with Daryl Hannah and HOUSESITTER alongside Goldie Hawn. He became America's Dad in films like PARENTHOOD and two franchises, FATHER OF THE BRIDE and CHEAPER BY THE DOZEN, and flexed his dramatic skills in David Mamet's THE SPANISH PRISONER and Lawrence Kasdan's Oscar contender GRAND CANYON. In John Hughes 1987 holiday classic, PLANES, TRAINS AND AUTOMOBILES, Martin played opposite John Candy as Neal Page, a man trying to overcome the insanity of holiday travel to get home to Chicago to be with his family for Thanksgiving. In his nuanced performance Martin showed a sensitivity and appreciation for "average" American life previously mocked and under-appreciated in films. 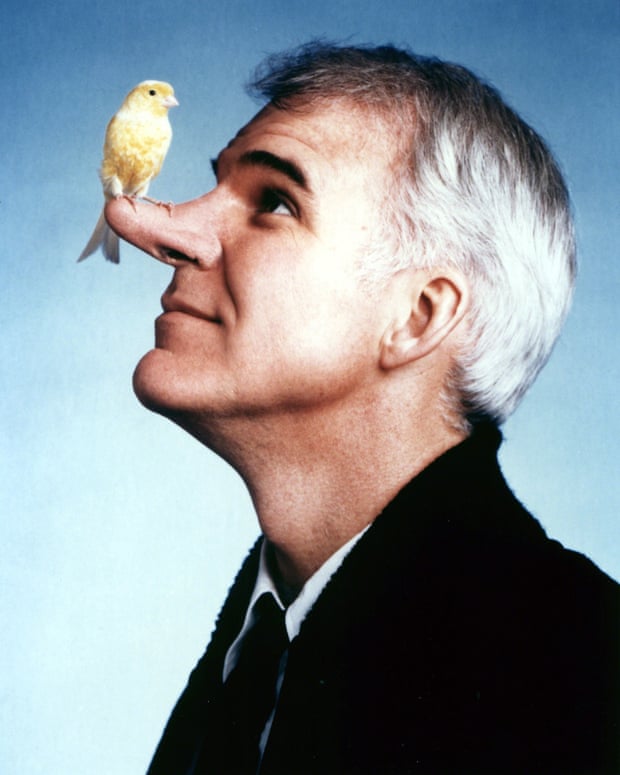 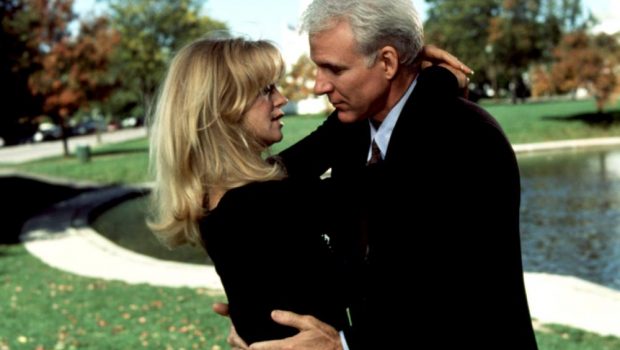 Steve Martin the author, (one of his many side hustles), has been equally successful with a robust portfolio of screenplays, articles (many for The New Yorker), novellas, books, children's books, plays including the Tony nominated musical Bright Star, co-written with singer/songwriter Edie Brickell. He has adapted several works: 2005's SHOPGIRL which Martin co-starred in with Claire Danes (Homeland) and adapted from his book Shopgirl: A Novella and, Martin's script for the 1994 film A SIMPLE TWIST OF FATE was loosely based on George Eliot's novel Silas Marner. In 2002 Martin wrote the most recent adaptation of the 1910 German farce Die Hose by the playwright Carl Sternheim. The play originally ran Off Broadway at Classic Stage Company and is still being produced around the world today.

At age seventeen Steve Martin started playing the banjo, a staple of his stand-up career. And before I continue let's be clear: Martin doesn't just play the banjo he is one of the world's best pickers. In his final stand-up comedy album, The Steve Martin Brothers, one entire side of the album featured Martin performing bluegrass music on his banjo. In 2009 he released his first all-music album, The Crow: New Songs for the 5-String Banjo featuring performances from Dolly Parton, Vince Gill, Earl Scruggs, Tim O'Brien, Tony Trischka and Mary Black. The album won the Grammy Award for Best Bluegrass Album. Martin made his first appearance at the Grand Ole Opry the same year. Martin has been touring and collaborating with American bluegrass band, The Steep Canyon Rangers since 2009. They've recorded several albums together including two that feature singer Edie Brickell.

For now you can only experience the delights of Martin performing with the Steep Canyon Rangers, virtually but when the pandemic is over, go see them live. You are in for a night of toe-tapping fun and endless smiles.

Another Steve Martin side hustle I should mention, hosting. Martin hosted The Academy Awards three times, twice alone and once with Alec Baldwin. Martin's legendary appearances hosting SNL (15 times, just one shy of Baldwin's record) supercharged his early screen acting career and left a legacy of some of the most memorable television sketches and characters of all time -- "The Festrunk Brothers: Two Wild and Crazy Guys", "Theodoric of York, Medieval Barber", “Dancing in the Dark” with the late Gilda Radner and of course, "King Tut".

If you're wondering who the real man is behind all these intimidating albeit impressive, over-achieving skills, look no further than Martin's long enduring friendships to reveal his character.

Martin Short first met Steve Martin in 1986 when they begin working on THREE AMIGOS! kicking off 34 years of friendship and a whole lotta yucks and fun for all of us. Short said of their friendship, “Some people you work on a film with and then they disappear. I think we both made a conscious decision, ‘We're not letting this one go.”

Spawned from their long-lasting friendship, the two-man stage show, Steve Martin and Martin Short: An Evening You Will Forget for the Rest of Your Life which the duo performed across the country. It became a special for Netflix in 2018.

Despite his many appearances on screen as a Dad, Martin himself did not become one until the age of 67 when he and his wife Anne Stringfield welcomed their baby girl. Martin said he named her "Conquistador" to avoid "those Weird Hollywood Names". Her name is Mary.

So on this 75th birthday of our Renaissance Man, Steve Martin, I salute you! I look forward to many more side hustles and a lot more laughter, music and prose.

I will end with this-- Martin's message of hope for when the pandemic is all over. A banjo song he wrote called "Jubilation Day". Take it away Steve!

Steve Martin Movies you can stream now on Amazon Prime

Happy 50th River Phoenix: Two Films to Remind Us What Shoulda Coulda Been